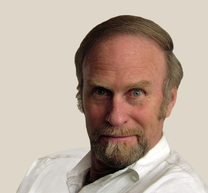 Frosty Wooldridge possesses a unique view of the world, cultures and families in that he has bicycled around the globe 100,000 miles, on six continents and seven times across the United States in the past 35 years.  He has written hundreds of articles (regularly) for 17 national and two international magazines.  He has had hundreds of guest editorials published in top national newspapers including the Rocky Mountain News, Denver Post, Albany Herald, Las Vegas Tribune and Daily Camera. He wrote a column, "CRYSTAL DESERT CONTINENT," for a major newspaper in Colorado while he lived in Antarctica. Frosty provides his unique point of view, research and experience to our audience.

Frosty Wooldridge has guest lectured at Cornell University, teaching creative writing workshops, magazine writing at Michigan State University, and has presented environmental science lectures at the University of Colorado, University of Denver, Texas A & M, University of Dayton and Regis University.  He also guest lectures on "Religion and Ethics" at Front Range College in Colorado.  He is a top radio and TV personality having interviewed on hundreds of stations across the United States. Please email Frosty at the link above or visit his web site at: http://www.frostywooldridge.com/

Marti Oakley is a political activist and former op-ed columnist for the St cloud Times in Minnesota. She was a member of the Times Writer’s Group until she resigned in September of 07. She is neither Democrat nor Republican, since neither party is representative of the American people. She says what she thinks, means what she says, and is known for being outspoken. She is hopeful that the American public will wake up to what is happening to our beloved country…….little of it is left.

There are so many attacks on our freedom from our own government it is difficult to to focus on only a few.  The attacks we need to fear come not from “someone over there”, but rather, from someone sitting in an office in D.C.  Those who hold these offices have done what no terrorist could have…..

Marti  encourages anyone with valid point of view to submit their comments, ideas and articles. Simply contact her at the address Above.

End the Lie is a very unique, independent alternative news site that was started by Madison Ruppert  who is the editor. At 22 years of age, this young man is sharp and on his game and write s with a unique flair for detail.

We invite you to look at the  End The Lie covering such diverse subjects as the Military, Big Brother, Economics, Police State Disinformation, Human Rights, Justice, Conspiracies and LIes, Self Sufficiency. Madison has a fertile curious mind that love to get to the true facts of the story. In addition to his web site Madison has his own radio show which rencently launch.